The cycle ride in 2012 involved a shorter 30 mile circular route, startng and finishing in Leamington Spa.

The Buwan Kothi Challenge in 2011 again involved a 50-mile route for experienced riders or 25-miles for less confident cyclists.

In 2010, the ride again took a circular 50 mile route through the Warwickshire countryside, starting and finishing at the Pump Room Gardens in Leamington Spa.

In 2009, there were two distances: a 50-mile route for experienced riders or 25-miles for less confident cyclists, starting and finishing in Leamington Spa in Warwickshire.

In 2008, 47 cyclists made it over the hills and through the energy-sapping head wind to complete a route from Oxford to Leamington Spa in Warwickshire.

The first Buwan Kothi Challenge – and the most ambitious – took place on a 58 mile route from Victoria park in Bethnal Green, London, to Priory Park in Southend-on-Sea, Essex. 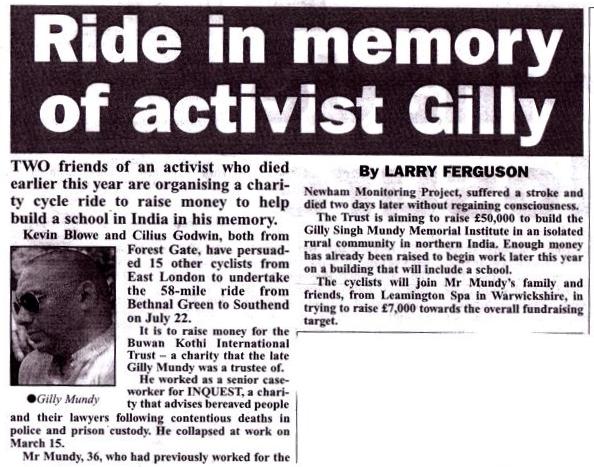 Article in the Newham recorder on the Buwan Kothi Challenge 2007

This was a ride that our friend Gilly Mundy had planned to take part in, before his sudden death in March 2007.