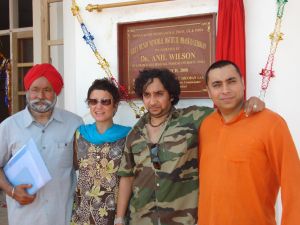 Hundreds of people gathered on March 17 to dedicate the Gilly Mundy Memorial Community School, exactly one year after Gilly’s sudden death. In just 12 months, the Buwan Kothi International Trust has raised over £50,000 to build the school in Lehrian, close to the village of Buwan Kothi where Gilly and his wife Debbie were married.

The inauguration ceremony was attended by a number of the charity’s Trustees and members of Gilly’s family and was addressed by highly respect Indian educationalist Anil Wilson , who for many years was Principal of Delhi University’s prestigious St. Stephen’s College.

Primary classes began on 2 April with 100 new pupils and the Buwan Kothi International Trust continues to fundraise for the expansion of the building to include secondary classes and a community resource centre.

The BBC’s Jatinder Sidhu covered the opening of the Gilly Mundy Memorial Community School for the BBC World Service:  Download his report or listen here:

In April, the opening ceremony was covered by the Leamington Observer