The following is the obituary published in the Guardian on 28 March 2007: 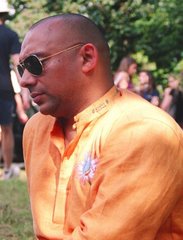 As a campaigner and activist, Gilly Singh Mundy, who has died suddenly aged 36, managed to cram so much into his own life and touch the lives of many in a positive, life-affirming way. For the last nine years he had been senior caseworker for Inquest, the charity that advises relatives of those who have died in custody.

Born to Mota Singh and Surinder Mundy, Gilly and his brothers, Jas and Rippee, grew up within Leamington Spa’s close-knit Sikh community, roots that he was intensely proud of. He was closest to his brothers and school friends, but his inspiration for a lifetime of political activism came from his father, whose values led Gilly to a passionate opposition to racism and injustice.

He was a student activist at Edge Hill College, Ormskirk, Lancashire, before starting voluntary work for the community, anti-racist organisation Newham Monitoring Project (NMP) in London and becoming its caseworker from 1993 to 1997. This was a turbulent time for black communities in east London, with the election of the first BNP councillor in Tower Hamlets and the racist attack by eight white youths on the 17-year-old Quddus Ali in Stepney. Gilly provided support for victims of racist violence, and coordinated anti-fascist campaigning, bringing together black and white working-class communities in the first anti-fascist festival in Canning Town, then the heartland of BNP support. During the inquiry in 1998 into Stephen Lawrence’s murder, he also worked for the Lawrence family campaign.

At Inquest, his way of patiently listening, guiding and providing strength to families led them to describe Gilly as “a man of the people”, combining his politics and belief in what was right and just with his compassion, humour and love for life. Never one to revel in the limelight, he had a rare gift, one that made him special. This was his ability to connect on a personal level, quietly and generously, with everyone he met.

His beautiful photographs, his love of music and food were an expression of his passion for life. Never happier than in the company of others, he threw legendary parties in Newham and Hackney. He was central to the “Conscious Clubbing”, a collective organising events and raising money for political causes, including the Free Satpal Ram Campaign. Ram was jailed in 1986 for murder after being attacked by racists in a Birmingham restaurant.

But the greatest passion of Gilly’s life was his wife and soulmate, Debbie. They were married in his family village in Haryana, northern India, a particularly proud moment for him which he shared with his family in India and his many friends who travelled from the UK. The generosity and friendship they were shown resulted in the creation of the Buwan Koti International Trust, of which Gilly was a founder. The trust aims to raise money for the rural community and the establishment of a local school.

Gilly was as generous in death as in life, donating his organs to help others, including a three-year-old child. He embodied the idea that a true revolutionary is motivated by the most profound love of humanity.

This is also available as a PDF

In the aftermath of Gilly’s death, his friends set up an online tribute blog at gillymundy.blogspot.com